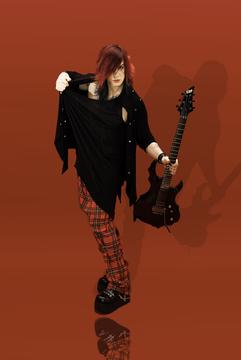 " Lightning " is a french guitarist/singer/composer . He is the first french artist inspired by J-Music who has signed with a japanese record label. At the age of fourteen , Lightning starts to play guitar. After seeing the legendary Visual-Kei band “ X-Japan,” he dives into the world of Japanese rock music. Amazed by such artists as Luna Sea, Dir en Grey, L’Arc en Ciel, Gackt and Miyavi, Lightning wants to create a new kind of melody. From 2009 to 2012, he joined various bands as lead guitarist and gives several performances in different venues. After giving some performances in USA, South Africa and Europe, Daniel Facérias (ex musician of Jean-Jacques Goldman, Daniel Balavoine) call him to work on his new album in the studio of Steve Prestage (sound engineer of Gary Moore, Peter Gabriel , Céline Dion ). At the same time, he discovers ALYS , the first Franco-Japanese virtual singer and meets Joffrey Collignon, CEO of Voxwave. He got a real interest in the global project and writes s