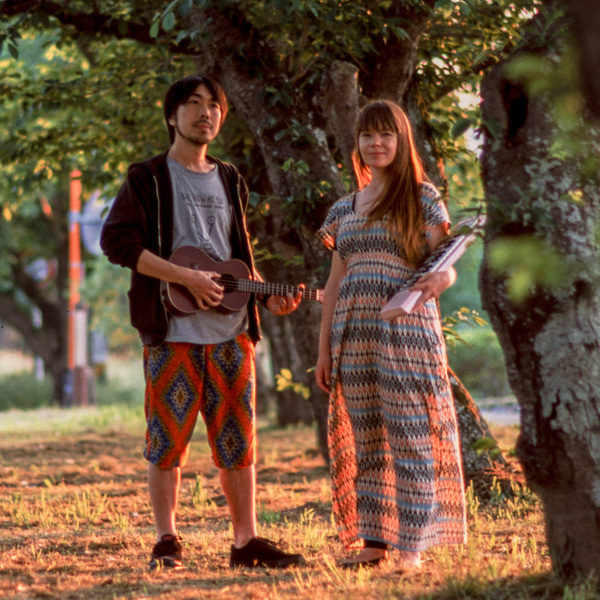 Kitenge Sunset at Noon Buying, working, I assume Mountains on their shoulders feel guilt that I'm older Musician, not a mother, I chose my lover Women dress up for evening walks says my seamstress when she talks Me into another gown, pattern upside-down worries that turn my lips into a frown Why can't I pay attention to the fact that they're all inventions? Brimming with electricity, it shines through my polished teeth, open up your third eye don't forget to breathe. Don't be afraid at night Even though critters delight Millipede Invasion Tarantula Undulation The branches drip their shadow ghosts in our house the guests and the hosts but in a sweet and dark place I find my swollen space No more hesitation, drenched in expectations

Santa Dharma is a Tokyo-based husband-wife indie rock/new wave band consisting of Tomo and Holly. They meld toy synthesizers, fuzzy electric strings, drum machines, and Buddhist accents, to create lo-fi, ethereal music that resurrects a retro future. Santa Dharma also has a home music studio where they host small live shows, featuring international artists, and live stream them online. The name of their band combines the founder of Zen Buddhism, Boddhidharma with Holly’s birthplace California (where cities are often named “San” or “Santa” something). They released their first EP, Sakura High, in June 2019 and are working on their full album to be released in 2020.